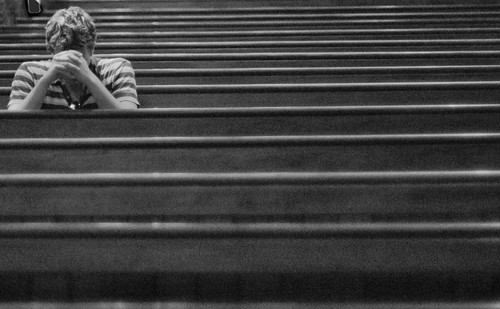 If I knew the answer to that question, I’d write an e-book and sell it and make a million dollars. We simply don’t know.

Let me be clear: I don’t doubt that God loves us. Loves me. I don’t question His justice.

There are two prayers in the Bible that we see are unanswered, and we get a glimpse as why.

While studying a passage for a Bible study I am presenting, I was looking at Gethsemane in the book of Mark. It must have been excruciating to Jesus to experience Gethsemane.

Three times he asked God to “remove this cup from Me” with the caveat “yet not what I will, but what You will.”

Three times, silence. His disciples even fell asleep. God was no where to be found.

Think about it if you will. Jesus spent about three years going from town to town in the countryside of Israel and his prayers were answered, often and repeatedly.

He prayed for healing, it was done. He cast out unclean spirits, done. He fed thousands of people. A time of constant communion with God.

Now, of course, he was to be the redemption of all of humans. There was a plan and a purpose, and he knew that. However, it still doesn’t change the fact that, as a human, he lost all contact with God. Jesus didn’t hear from God in his greatest time of need, and his disciples failed him.

Another time in the Bible, there is an unanswered prayer.

8 Concerning this I implored the Lord three times that it might leave me. 9 And He has said to me, “My grace is sufficient for you, for power is perfected in weakness.” Most gladly, therefore, I will rather boast[c]about my weaknesses, so that the power of Christ may dwell in me. 2 Corinthians 12:8-9

Paul had a “thorn in the flesh.” What it is we do not know, but one thing is for sure, it was agonizing, causing great pain, whether physical or emotional.

Have you ever had something that caused great pain that you wanted gone?

Maybe it was an emotional state, depression, a distorted self image or chronic pain.

You implored God to remove the “thorn.”

You pounded on the floor, and you cried in anguish for God to take it away.

I’ve had a physical ailment that began, in its worst, present form, when I was just 25 years old. I am 43 now.

I just wanted it over. I wanted God to miraculously heal the physical ailment.

Why does He not heal that ailment?

I think now, it doesn’t seem to matter any more.

It hasn’t gone away.

It doesn’t keep me from praising God.

It doesn’t keep me from going to church on Sunday.

It doesn’t keep me from teaching a Bible study class.

It’s just something I have to deal with.

Why is that prayer unanswered? I don’t know.

I think it helps me be stronger in my weakness.

I can say with Paul:

10 Therefore I am well content with weaknesses, with [d]insults, with distresses, with persecutions, with difficulties, for Christ’s sake; for when I am weak, then I am strong. 2 Corinthians 12:10

I don’t know the answer to your unanswered prayer. I do know that his “grace is sufficient.”